Jeremy Clarkson, James May, and Richard Hammond are back this Christmas with even rougher challenges for The Grand Tour Madagascar Special: A Massive Hunt.

What to look forward to for this Christmas Special? Exciting vehicle reinventions, lots of humor, stupider stunts, and a pirate treasure! And now, James May shares his thoughts on the delay of the show’s Christmas Special.

Amazon Prime Video released the official trailer earlier, opposite to rumors reported that it will be released later in December. The trio navigates the roughest of the roads of Madagascar in search of that mysterious pirate treasure.

When is the Madagascar special released? Host and star May shared his statements regarding the show’s delay. He claimed “It is difficult to answer people who know we’ve made it, who know it’s ready and just want us to put it bloody on Amazon. I don’t know what to say other than watch my cooking show in the meantime. [The Grand Tour] is coming and it is, I think, pretty good.”

The release of the show was further delayed when the show’s producer Andy Wilman caught Coronavirus. The final stages of editing of the show were pushed back. Wilman has recovered but Clarkson revealed other issues with edits like the temporary shut down of voiceover suites and edit suits.

Earlier this year, Amazon Prime Video teases on a Christmas special on Twitter. The earlier details were revealed which made fans more excited.

Yes, the next Special will land later this year.
Yes, it’s filmed in Madagascar and yes, there will be cars.
Yes, we wanted to go to Russia.
No, we couldn’t (we all know why).
Yes, we will try again.
No, we don’t know when.
Yes, we will keep you updated.#TheGrandTour

What do we know about the Madagascar Special: A Massive Hunt?

The trailer teases on the trio driving three sports cars modified and “uninvented” for the muddy and rough terrains of East African coasts. These cars are believed to be a Ford Focus RS, Bentley Continental GT, and a Caterham.

May shared his excitement over BBC Radio 2 and revealed they had a lot of fun with the challenges. He also fell in love with the natural beauty of Madagascar.

> The Grand Tour Scotland special – the boys are back filming

Not even the pandemic can keep these men from doing what they do best — driving and modifying cars. This time it is for The Grand Tour Scotland special.

The trio shared they went filming as usual and thankful no one tested positive for the Coronavirus during the entire nine-day shoot. 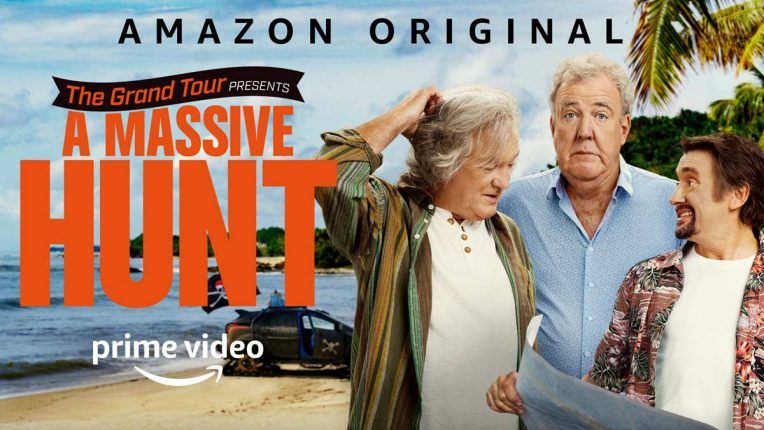 Is The Grand Tour ending?

While the planned specials were on hold due to the pandemic, The Grand Tour is far from over. In fact, the show is leaning towards airing more specials.

What happened to The Grand Tour tent?

In the last episode of Season 3, Clarkson broke down as the show filmed its final episode with an audience. Since then, the show shifted from studio shows to an epic adventure in reality show format on the road.

As Clarkson said, “So although the tent has gone, The Grand Tour goes on.”

What are Clarkson, Hammond, and May’s new solo projects?

For the fans looking forward to seeing more of the trio outside The Grand Tour show and as individuals, they have several shows lined up.

May has a spin-off series on Amazon Prime Video called Our Man in Japan. The series is ready for streaming now. The show records May’s exploration of Japan 15 years after first setting foot in the country of cosplays and extraordinary culture. He’s also just released a new cooking show called ‘Oh Cook’.

Hammond, on the other hand, is teaming with Mythbuster’s star Tory Belleci for an untiled spin-off series involving shipwrecks and a beautiful desert island.

Clarkson will have his own adventures, this time as a farmer, in a show with a working title I Bought A Farm. Will Clarkson enjoy the peaceful rural life? Or is he going to challenge by farming nightmares?

What happened in The Grand Tour Presents: Seamen?

For a little flashback, the trio journeyed the iconic waterway of Vietnam and Cambodia, the Mekong Delta in The Grand Tour presents Seamen.

Instead of cars, the trio modified boats according to their preference and needs.

Clarkson recreated a Patrol Boat River used in the Vietnam war-era while Hammond went for a Miami Vice pegged speedboat. May opted for the classic 1939 wooden cruiser.