“Boulders the size of washing machines and ruts so deep you could fall into them.”

According to Jeremy Clarkson, host of The Grand Tour, there’s a simple and suitable explanation for the hardship Madagascar threw at them during the filming of The Grand Tour Presents: A Massive Hunt, which was released earlier than expected, today. 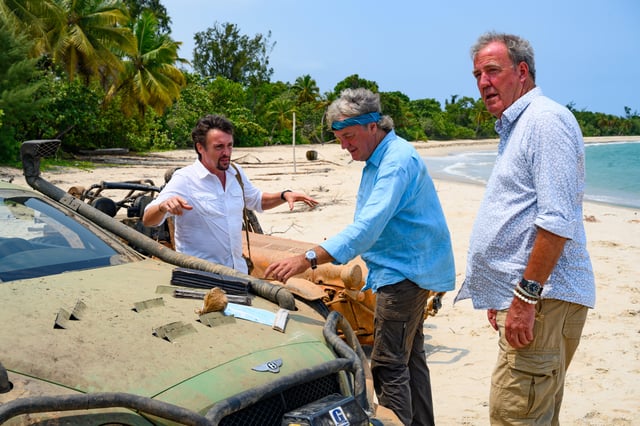 The locations for the latest episode of The Grand Tour Presents: A Massive Hunt, are remotely located in the Indian Ocean, Madagascar and Reunion Island, 435 miles to the east. 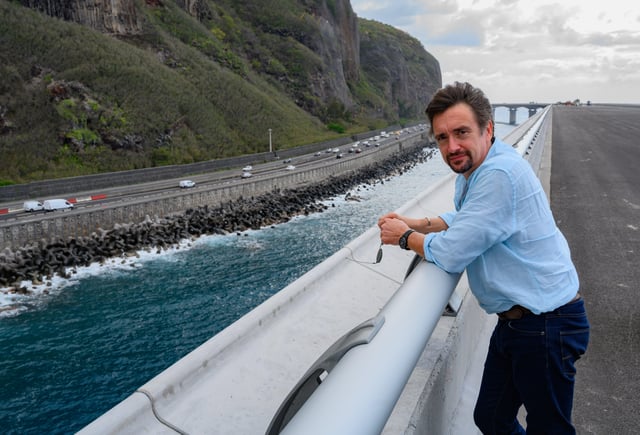 The trio was previously seen sailing boats rather than cars to the South China Sea as part of The Grand Tour Presents: Seamen, the intrepid adventurers are expected to return, opting for the familiar luxury of four wheels and dry land this time.

After the last adventure of the trio, which saw them exchanging vehicles for boats to discover the South China Sea as part of The Grand Tour Presents: Seamen, the hosts are expected to be back, behind the wheel of three highly modified off-roaders. 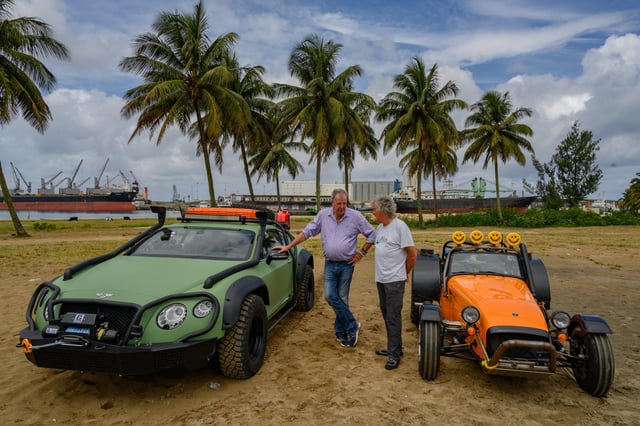 Their mission is always a little unconventional.

The treasure hunt has been too much some of the planet’s brightest and most talented individuals, including writer Ian Fleming of James Bond. Now, our favourite presenters Jeremy Clarkson, 60, James May, 57, and Richard Hammond, 50, set out to chase the mysterious pirate treasure of French pirate, La Buse.

Clarkson, who was born and raised in Doncaster, says:

“I’d never been, so I came up with this idea that we should go to Madagascar.”

“Hammond is obsessed with pirates, so he jumped up and down and squeaked a lot when I said it, and then much to my better judgment, we decided it was going to be a pirate-based story.”

It’s a topic of discussion that Hammond is passionate about:

“I love the romance, the idea of a pirate era because I’m a child,” he declares. “Supposedly a very famous pirate scattered his treasure there and then threw clues to the crowd shortly before he was hung.”

The scope of their Madagascan filming location may sound surprising to many audiences, Clarkson claims:

Half the time you’ve got quite a sheer drop down to the sea below, albeit the very inviting, warm Indian Ocean, azure blue sea with a nice white beach along with it.

I think the most beautiful place I’ve ever been is Seychelles and actually, geologically speaking, Madagascar’s probably from the same rock formation.”

Clarkson goes on to share the local highlights that the country has, which he described as “fascinating ability to put extra syllables in every single word” and that there are “unnecessarily long, long, long names”.

Clarkson also shared his fascination for the president’s long name:

“The president’s name, last time I looked, must have got 300 letters in it.

And then the capital city [Antananarivo] goes Ant-ana-ant-ananan-ant-anananarivo – really long names. It makes the road signs hilarious because they’re all 16 feet across when you go into a village.”

He went on with his strong position on Brexit:

“I was a Remainer and a fervent believer in the EU and what it stands for, but when you see something like that you just think ‘Oh for heaven’s sake, no wonder Brexit won when we’re sp****** this much money on a completely unnecessary vanity project on the other side of the world’.”

Things take a turn for the unexpected at this level when series producer “Mr Wilman” instructs the hosts to start on their next assignment: hunt down a hidden treasure.

As part of the challenge, the trio has to face one of the world’s treacherous terrain — Madagascar’s Route Nationale 5. This required the hosts’ sports car to undergone a comprehensive overhaul.

With May picking a Caterham, Clarkson a Bentley Continental and Hammond for a Ford Focus RS, the newly modified cars set off to conquer the rough landscape of the island.

May spoke of The Grand Tour Presents: A Massive Hunt challenge:

“It was a proper car-y adventure where we pushed things beyond their natural limits and I quite enjoy that sort of thing.

You thought it was just for car nerds who bore you at petrol stations and go on track days but it turns out it’s for explorers – and even [Caterham] didn’t know that.”

Hammond followed the no half measures strategy, stating he “wanted something that was really fun to spank around in,” similar to his previous vehicle improvement options.

“When it became clear we would be punishing these things off-road, I realised that essentially a rally car for the road wasn’t going to be ideal for proper off-roading.

So, in my wisdom I then put it on tracks. The tracks were amazing but perhaps are more designed with snow in mind.”

As for Clarkson’s Bentley Continental? The 60-year-old could not be any prouder:

“I loved that car so much I arranged to have it shipped back and it’s currently living with me on the farm at home – which I’ve never done with any car.”

Editing was the only stage greatly disrupted of filming by Covid. But with the time the hosts spent in the company of each other they all question if whether they could survive each other.

“There’s two answers there. One, my immediate answer is a sense of utter revulsion and terror at the very prospect – dear God.

But actually, do you know what? Probably better than most, because we’ve been working and living together in a bubble for 20 years anyway. A while ago, I was making my breakfast – spreading some Marmite on toast – and James was standing there and he suddenly erupted.

It turns out he hates the way I spread my Marmite to the edge of the toast and just detonated at me – and that’s when we both stopped and realised we have spent too long together. It’s not only the fact that he’s noticed that, it’s that for some years that’s been annoying him – the way I make my own breakfast. It speaks of how many breakfasts we’ve all shared together.”

On the other side, Clarkson expressed relief when the show details were finally released.

Jeremy Clarkson mentioned he is pleased that the new exclusive Grand Tour is just about to launch, so fans on social media can stop bothering him.

The anticipated Madagascar automobile show special was delayed by the pandemic of the coronavirus and Clarkson is pleased that viewers will now be able to stream it.

“It’s a year since we filmed it – I can’t remember anything to be honest, it’s like trying to remember the holidays when I was seven. But, I am finally glad because it means that people will stop going on social media and asking me every 25 seconds ‘why haven’t you released it yet?’ It’s not me! But, anyway, it’s finally ready.

“I think a lot of petrol heads are going to like this one because I think they will be genuinely amazed three cars were able to do what they did.”

The Grand Tour: A Massive Hunt Is A Brilliant Return To Form For Clarkson, Hammond, and May

The Grand Tour Presents: A Massive Hunt - The Reviews Are In And Very Mixed